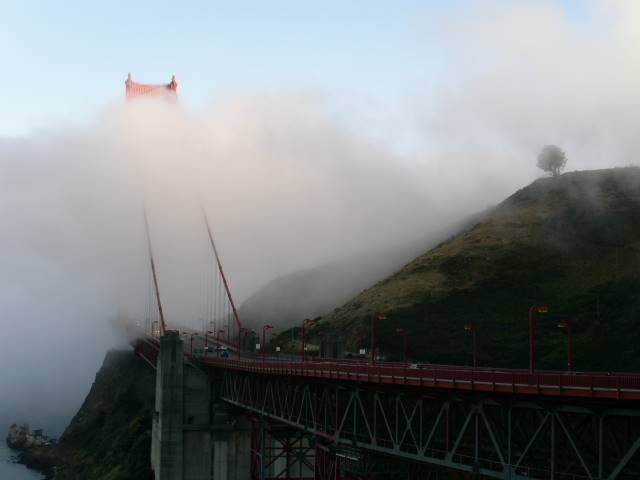 Native Americans have called the San Francisco Bay region home for over 10,000 years. Park areas south of the Golden Gate, from the San Francisco Peninsula, to the East Bay and south to Monterey, are the aboriginal lands of the Ohlones (also called Costanoans). Park lands north of the Golden Gate, primarily in Marin County and Southern Sonoma County, are the aboriginal lands of the Coast Miwoks. The parkâ€™s oldest archeological site is shell material found at Landâ€™s End, dated from 150 AD.

Both the Ohlone and Coast Miwok peoples were organized into small, politically independent societal groups or tribes; the Ohlones had about 50 tribes and the Coast Miwoks had approximately14 tribes. Ethno history suggests that small villages were maintained along the marshlands. In San Francisco, the villages were located at today's Fort Mason, Crissy Field, and Sutro Baths. In Marin, the Coast Miwok encampments were located near todayâ€™s Horseshoe Cove in Fort Baker and at Big Lagoon at Muir Beach. Groups moved annually between temporary and permanent village sites in a seasonal round of hunting, fishing, and gathering. Periodic burning of the landscape was conducted to promote the growth of native grasses for seed gathering and to create forage for deer and elk. Ohlones and Coast Miwoks plied bay waters in boats they crafted out of tule reed. The world view and spirituality of both the Ohlones and Coast Miwoks were expressed in a complexly woven tapestry of stories, myth, song, dance, and ritual.

Singing was an important part of Ohlone and Coast Miwok culture

In 1776, when Spanish military and civilian settlers arrived in the Bay Area to establish military garrisons (presidios), Franciscan missions, and civil settlements (pueblos), life abruptly and dramatically changed for the native people of the San Francisco Bay Area. With Spanish colonization, came the introduction of new diseases and the establishment of mission communities meant to supplant the existing tribal organization.

Because they lived closest to the Presidioâ€™s military garrison, members of the Ohlone tribe that inhabited the San Francisco Peninsula, called the Yelamu, were baptized and taken into the missions as early as the 1770s and 1780s. Because the Coast Miwok tribes lived further north, their indoctrination came a little later. In 1783, several members of the Huimen community, who inhabited the southern-most part of Marin County, were the first of the Coast Miwok to leave their homeland for Mission San Francisco. This initial migration was a sign of the times to come. By 1810, introduced diseases, forced labor, and efforts to indoctrinate the indigenous peoples into an alien society and religion led to a tragic destruction of the way of life of Ohlones and Coast Miwoks.

Today, descendants of Ohlone and Coast Miwok peoples live throughout the Bay Area. Many are organized into distinct tribal groups. While participating in contemporary society, they are actively involved in the preservation and revitalization of their native culture. Restoration of native language, protection of ancestral sites, practice of traditional plant uses, story telling, dance, song, and basket weaving are all aspects of these restoration efforts. The National Park Service works with Ohlones in stewarding the preservation and interpretation of ancestral sites in the Presidio and throughout the park south of the Golden Gate. The Park Service is working in a similar fashion with the Coast Miwok who today form a single, federally-recognized tribe, the Federated Indians of Graton Rancheria.

This domain and web site may be for sale!